Thanks, Patricia, so
we may have Dance studio in May.  (Pending)
AND:
Friday June 24, 9 AM till June 30, 4 PM
new Blackbox  request Pending
"For Para-site installation experiment, and Memory+Place+Identity experiment.  Zohar Kfir, Sha Xin Wei & Topological Media Lab."

Hi All, So I have been in touch with Michael Montanaro, regarding possible May dates for our formal trials. He has asked us to propose a few dates and times, so long as between 1pm and 10pm, so that he can assess what he is able to accommodate at his own studio. I may be able to send you further information regarding the lay out of the studio, this weekend. x patricia

Laura, shall we meet Wed 2 PM next week to to talk about a paper?
Jen if you're interested in joining us, you're welcome
Cheers, Xin Wei
Begin forwarded message:

Whoops:
I meant Plant/Ecology  +  Memory/Place
groups of course:
Temporal Environments: Rethinking Time and Ecology
Deadline: April 01 2011
Updated: January 16 2011
Special Issue of the Journal of Environmental Philosophy Editors:
Jacob Metcalf (UC Santa Cruz) and Thom van Dooren (University of
Technology, Sydney)Place and space have received substantial attention in environmental
philosophy in recent decades. Theorists from a variety of fields have
proposed that reorienting our relationship to the non-human world
requires reconsideration of ways of understanding and inhabiting
spaces and places. Ecophenomenologists have argued that replacing
meaningful places with abstract space was a critical moment in
histories of environmental destruction, and environmental ethics will
require re-imagining place as meaningful again. Bioregionalism has
emphasized the need to rethink our places as ecological relationships,
and inspired not only changes in academia, but also in environmental
movements such as food localism. In a related vein, Val Plumwood has
cautioned against too simplistic a notion of “one’s place”,
critiquing
the fracturing of place in which cherished homeplaces are able to be
preserved only as a result of the destruction of less visible ‘shadow
places’. In short, there is a broad assertion that reassessing our
obligations to more-than-human worlds requires understanding place as
more meaningful than an empty space to be filled by human concerns.This special issue of the Journal of Environmental Philosophy will
present a collection of articles that direct similar attention to the
time and temporality of environments, a topic that has been relatively
neglected by environmental philosophy and ethics. Although
environmental ethicists have long discussed temporal issues, such as
intergenerational justice, time has often been treated as an
essentially linear and static container for human action. But if we
conceive of time as produced, constructed, maintained, lived,
multiple, and a more-than-human concern, the possibilities for
environmental philosophy look dramatically different. This collection
will offer such a framework for thinking through time and environment
by exploring the multiple lived times present in global climate
change, species extinction, the practices of ecological sciences, and
the temporal fidelities of conservation and restoration.Among the questions we hope this collection might explore are: What
philosophical reconsiderations of time might be available and useful
for other ecological disciplines? How does the pace of human life—
markets, science, desires, consumption—impact our ability to imagine
and produce livable futures? How might we remember different, and
sometimes lost, ways of valuing human and nonhuman worlds in a way
that does not fetishize the past but still holds it open as a resource
for constructing better futures? How does an attentiveness to the
scope of evolutionary time alter our sense of obligation in a time of
massive biodiversity loss? How does the high-speed pace of much human
life actually make it harder to change the conditions of those lives?
How do humans and other animals learn to justly co-inhabit our
sometimes very different temporalities? What ways of life are enabled
or disabled by different temporal metaphors? What post-colonial
temporalities are necessary for recuperation of cultural ecologies
damaged by genocides and ecocides? Will sustainable ecologies require
new models of temporality to reformulate growth, degrowth, and
regrowth?We invite submissions from environmental philosophers and other
ecological scholars, including reflective pieces from natural and
social scientists. Pieces that are grounded in specific cases of
temporal environments are especially encouraged. We welcome pieces
from international and native communities, and others not often
represented in philosophy `journals.The Journal of Environmental Philosophy (http://
ephilosophy.uoregon.edu/) is a peer-reviewed professional philosophy
journal, and is the official journal of the International Association
of Environmental Philosophy (IAEP). The Journal of Environmental
Philosophy publishes innovative research relevant to all areas of
environmental philosophy, including ethics, aesthetics, metaphysics,
theology, politics, ecofeminism, environmental justice, philosophy of
technology, and ecophenomenology. Target publication date: Spring 2012
Abstracts of 300-400 words, due by April 1, 2011 Papers due for review
by August 1, 2011 There are no word count restrictions, but
submissions are encouraged to aim for 6-8,000 words. For further
information or to submit abstracts, please contact Jacob Metcalf
(jake.metcalf@gmail.com) or Thom van Dooren
(thom.van.dooren@gmail.com).

Great picture. I think this is the perfect set-up. Thanks for looking into this. We get the big baboon and our participants hang underneath (with the updated glove on, of course). We'll need to get some bags of wood chips. We'll need to alter the protocol a little + I think the debrief should include the primate. I think this can work.
a

I suggest that we meet next Thursday in the TML to go over the video record of the first trial and begin to prepare a Call for Participation.
The attached photo was taken by yours truly in 2008 at the Metro Toronto Zoo. The baby baboon pictured below is now of full size and anxiously awaiting his participation in our installation.
Until the next meeting,
Niomi
On Wed, Mar 9, 2011 at 7:51 AM, Sha Xin Wei <shaxinwei@gmail.com> wrote:

Protocol people -- Noah Niomi Tristana  et al...
How about you guys decide, write  up a call for participants in the installation, t we will circulate.  Let's pose this not as an experiment, but as an art installation.  Let's regard our visitors as guests not as subjects.
cheers,
xw
On 2011-03-07, at 1:52 PM, "p.a.duquette" <impetus@graffiti.net> wrote:

I should perhaps add that I'm presenting y'all with the highest qoute, in search of an allowable budget range. Zohar and I are for sure looking into cheaper alternatives in the interim.

-----Original Message-----
From: p.a.duquette <impetus@graffiti.net>
Sent: Mon, Mar 7, 2011 12:45 pm
Subject: formal trial date & build costs [memory/place]
Hi All, I can't seem to find reference to our overall schedule; when is it we are holding the formal trial (with selected glove / subjects, et al)? We are looking to know the timeline we are working within. Zohar and I were discussing the possibility of using a wrist brace, upon which we would mount our new glove's electronics (such as this: http://www.jeancoutu.com/sante_catalogue_items.aspx?id=3792&langtype=1033). It is firm as well as flexible enough to serve this purpose, and we would imitate it's design for a finger brace (where the vibrating motor and photoresister / light detector would be mounted). Both would be fastened via Velcro, thus adjustable. Altogether, one device built this way would likely cost btwn 50-60$ (depending on how many parts we can pilfer rather than purchase). Is this affordable budget-wise? Is it affordable to build two of these (whether as 'back up' or to be worn on both hands)? 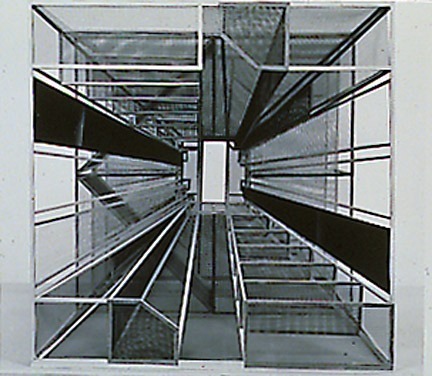 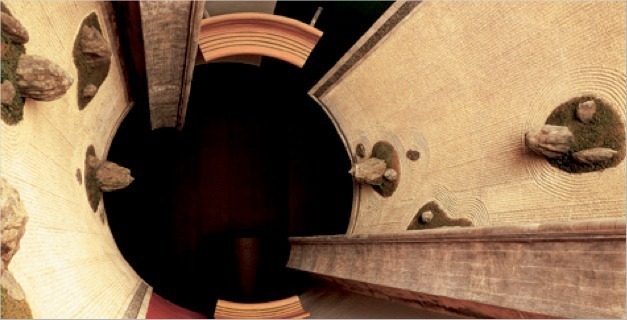 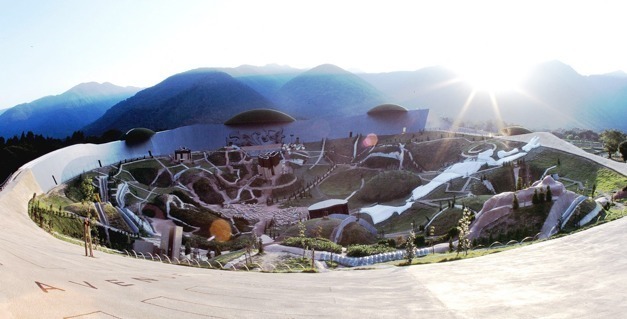 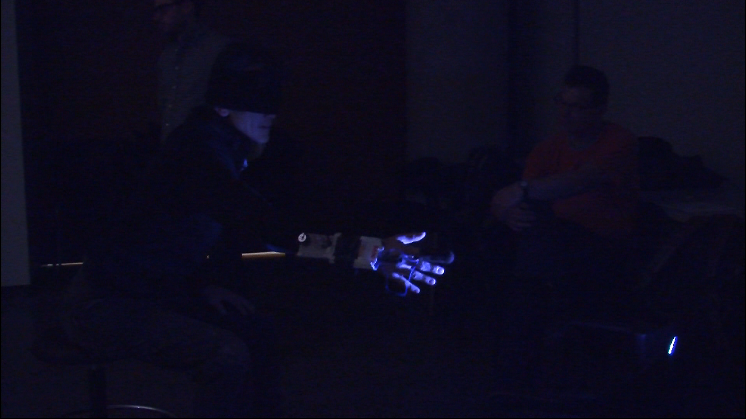 Carissimi Memory + Place People,
Congratulations everyone on a very illuminating reheasal of our variant of the Lenay Steiner experiment!
(sorry, couldn't resist that one)    Compliments to Naomi, Noah, and everyone working on the protocol (Thanks Tristana!)   Compliments to the glove makers Zohar and Patricia (Claire?).   Special Thanks to Adrian Freed in Berkeley for device-level help, intricately sensitive to some phenomenological implications.  (I'll forward Adrian's thoughts with his permission to share those implications.)
Some observations:
0.   To set some working vocabulary,  let's call the thresholded logic, the "on-off" or "binary" feedback, NOT digital.  In many situations, a digital logic can be written to imitate a continuous response to a degree largely indistinguishable from a human's perspective.   And an analog circuit can be made to imitate a binary logic.  Viz. a light switch.
1.  I agree that the most appropriate situation to try will be: (1) cloth-ring with motor; (2) cuff+velcro with amplified circuit (digital or analog + filters to make binary feedback); (3) nova: superbright  compact LEDs in a diffuser container, not a beam; (4) option to stand and walk around, with spotters.  (See comment #3.)
2.  The interesting effect of binary feedback is that the person is sensing projective geometry: all rays from the target (luminous object) are identified to a single "on" by the binary logic; moving the sensor toward the object along a given ray does not change the intensity of the motor.    "Normally," (we think that) the body equipped with stereo vision constructs range information from relative movement.   It gets even more interesting.  By approaching the object, the object subtends more of the your field of vision  -- it looms larger.  But in the case of the glove's "projective geometric" sensing: approaching the object, and sweeping your hand left and right, you subtend a smaller angle.   By carefully removing all range information, including Clever Hans info from the spotters, the object may appear to recede or get smaller as you approach it.
I would like to try to see if this can be the case!
3.   So obviously prosthetisizing the body by bold-facing the pointing finger may introduce overly cognitive scaffolding just as much as telling the person to mentally locate an object in a mental map of the room.
Two-handed accoutrement should elicit significantly different behavior from our one-glove situation:  reaching for, reaching around, shaping, vs pointing to, indicating ...  Behavior may be too loaded a term, but someone else can help suggest a less suggestive vocabulary here.
Hey, when's our next experiment?   We should press on because the term is rapidly closing, and our supply of eager subjects may drop as final projects hit.
Cheers! Onward!
Xin Wei

This is the one we'll try for the first time tomorrow... 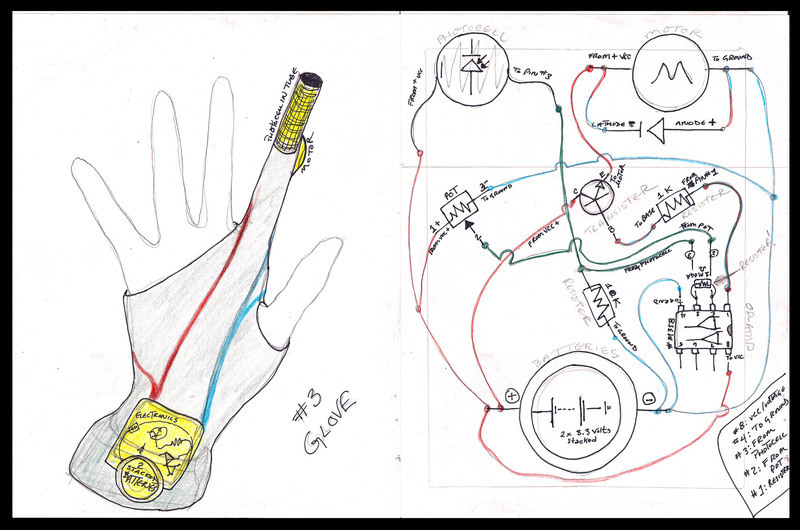 This is the one we'll try for the first time tomorrow... z & p

Just to test my posterability, delete this whenever.
And thanks zohar, patricia, claire. Trying the glove, even in rudimentary circumstances was quite enlightening, you could say. There are definitely new ways of shaping to be experienced. And interesting on the experimental set-up side to know that the thing or shape we make as a target is not actually the shape we think it is. Clearly a need to eliminate cross-pollution in that regard. All of which justifies starting with the simplest reduction of the original experiment both to investigate the phenomena and to reduce the pollution. From there I can imagine about 20 interesting experimental variations with this tech set up alone. This could take about a decade.   Andrew